On Monday, the first matches of the Wimbledon tennis tournament will be played. Upon the eve of the third Grand Slam, the men’s tennis tour is mostly unchanged from last year. Just like last year, Roger Federer and Rafael Nadal split the first two slams. Just like last year, they are 1 (Nadal) and 2 (Federer) in the Race Rankings. Just like last year, we’ve watched and wondered about the rise of new players — Alex Zverev, Dominic Thiem,  and the return of the other members of the Big Four — Novak Djokovic, Andy Murray. But neither cohort has broken through the iron-clad grip of Fedal.

Last year, Roger Federer won Wimbledon without dropping a set. Marin Cilic looked threatening and then broke down in the final. Rafael Nadal lost to a grass court specialist in the early rounds. It was fairly predictable. We might hope for a more interesting tournament this time around, but just as last year, the best odds once again have Federer hoisting the trophy. Can he defy father time again? With no further ado, here are my predictions for Wimbledon 2018:

Fed’s here. He should play Borna Coric in the fourth, who played excellent, Djokovic-like tennis to beat the Maestro in Halle. Unlikely the young Croat can replicate it in a best of five set match.

On the other side, we have two big, boring servers, and two short, stylistic baseliners. Sam Querrey and Kevin Anderson are the former pair. Richard Gasquet and Phillip Kohlschreiber, the latter pair. Which player will come out on top? I think Gasquet, who has a great history at wimbledon and won a grasscourt warm up. Expect some tiebreaks.

Fed will then destroy Gasquet.

Best matches: Honestly , not much. Watch Coric vs Federer. Rarely does Federer ever lose to the same player twice in a row. Federer will likely play more aggressively (lots of serve volley?) and try to knock the young Croat off balance. 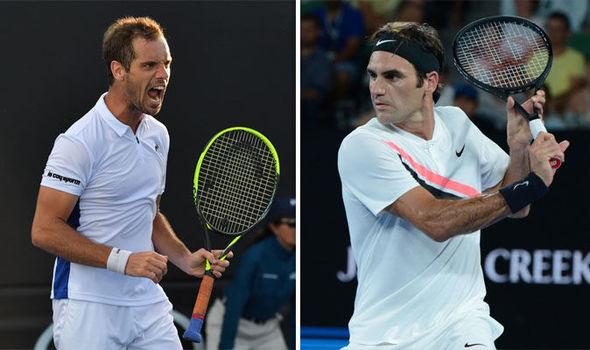 Marin Cilic landed here. Cilic was staggeringly good in queens. He beat Verdasco, Muller, Querrey, Kyrgios, and then Djokovic in the final. A younger Cilic would have capitulated at multiple junctures. But the Cilic of today was confident, focused and strong off the ground. Especially so in the final against a resurgent Djokovic.

Marin Cilic will likely coast, even in a potential match against Milos Raonic. The big serving Canadian shouldn’t pose a serious threat; he just doesn’t have the physical fitness to win a five-set battle.

The bottom section of the quarter could fall to John Isner. Also, look for my favorite up-and-comer, 19 year old Stefanos Tsitsipas. He has nice volleys and good mental toughness. Maybe he can take advantage of Dimitrov’s recent (is it just recent?) flakiness.

Grigor Dimitrov vs Stan Wawrinka in the first round. In other years this could be a popcorn match, but neither player has been playing particularly well. What’s your over-and-under on shanked one-handed backhands?  30? 50?

Radu Albot: If he beats Carreno Busta, how many rabid reddit fans will call him the GOAT?

Lucas Pouille: How many times will the commentators call him POO-ee? (it’s puweel I believe) Now things get a little tricky. The contenders:

I guarantee you that one of these men will win the quarter. Not good enough? Dang.

Here are some staid, boring predictions:

Go with consistency. Novak Djokovic is hard to beat in a five set match, and he’s been steadily getting better all year. Thiem will tumble on the slippery stuff. Kyrgios will feel a hip injury against Istomin and throw in the towel. Kei Nishikori just sucks on grass.  Zverev and Edmund will play solid, unspectacular tennis and lose to Djokovic.

What the kid in me envisions:

GO TOMICCC!!! Just kidding. Edmund could hit enough ballistic forehands to beat Djokovic. He’d then probably lose to Khachanov. On the other side we’d have Zverev scream ‘come on’ in threatening fashion and then flop, allowing Kyrgios to run rampant. For the semifinal spot: Karen Khachanov vs Nick Kyrgios, with NK taking it.

Unfortunately, I’m going with Djokovic. Too many unlikely things would have to come together for him to lose it.

World No. 1 Rafael Nadal’s down here. He actually looks pretty safe until the quarters. His route there:

Rafa could lose to Zverev Sr.. The left-handed German plays serve-and-volley, and Rafa may get flashbacks. I just don’t see it though, especially because Zverev is off wasting resources in the final of a warm-up tourney. I think Del Potro has the mental game and weapons needed to put the Spaniard out (and his draw is not all-that-bad).

I would be remiss in forgetting:

Andy Murray: sure to raise a clamor in the hearts of young British lassies, but also surely not ready for a big run.

Jeremy Chardy: Chardy’s randomly playing well on grass (with his backswings? what?), and could cause people trouble.

Jack Sock: how badly will he play.

It’s time for the Croat. He nearly beat Fed in the semifinals two years ago. Federer’s better now and more confident. But so is Cilic. (full disclosure, such was my prediction last year as well)

Also picking the upset (not on paper but in H2H). Djokovic has lost that half step of movement, and lost that half meter of depth on his groundstrokes. Del Potro’s gigantic game will punish those small margins.

After defeating Federer, Cilic will be thinking of USOPEN 2014 days, and crush a fatigued Del Potro in the final.